The Defining Artworks Of 2020 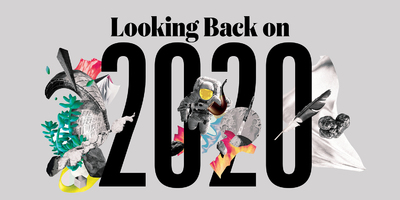 For much of this year, galleries, museums, and art spaces across the world were shuttered by Covid-19. Although art remained locked away from public view, that didnâ€™t mean artists werenâ€™t busy at work, crafting paintings, sculptures, photographs, films, videos, and more that spoke to the mood of 2020. Whether in the form of film anthologies released digitally or protest-minded projects that took place outside the walls of art spaces entirely, artists continued to mine new territory and, in the process, redefine what art could be.

This list below surveys the 20 works that came to define this year. Included in it are new works responding directly to the pandemic and the ongoing Black Lives Matter protests sparked by the police killing of George Floyd at the end of May. Some works created to address such topics were fleeting and glimpsed only for a short period of time; others are permanent and will likely be seen by many in the years to come. By tackling collective fears...

How can I stand by to look at what the future of my Grandchildren will be without doing my part?

Please Join them at https://globalclimatestrike.net/

In Washington, D.C.â€™s museum world, 2019 is beginning with a whimper.

As the partial shutdown of the federal government enters its second full week, all Smithsonian museums and many other agencies in D.C. and beyond have shuttered for lack of funds, or are getting ready to close for an indefinite period. Among those closed on Wednesday were the Hirshhorn Museum and Sculpture Garden, the National Air and Space Museum, and the National Zoo in Washington, D.C.; the National Museum of the American Indian in D.C. and New York; and the Cooper Hewitt Smithsonian Design Museum in New York.

The National Gallery of Art, which is not part of the Smithsonian but receives significant government funding, was open, but if legislation is not passed to provide funding by midnight tonight, it will also close Thursday, according to a press representative. [Update, January 3: The NGA closed on Thursday.]...

Surround Your Lifestyle With ART

Art has an amazing effect in our Life. “It Lifts it up, Brightens our Days, Enhances our Creativity, Brings Music to our Souls.!!! “

Rafael’s creations bring a feeling of Joy thru out the day as We surround ourselves with Art.

Whether you Hang it on your walls + Digitally Stream it + Wear it around the Beach + Decorate your Home + Bedroom + Bathroom + Space + Office + Hangout in Style + Dress the Family + Work in Style… Do it All with Art.

Woman with a Hat - Sketch Drawing with a Touch of Elegant Red.
Purchase a 24.00" x 36.00" stretched canvas print of Rafael Salazar's Woman with a Hat for the promotional price: $135
3 Prints Remaining

Give The Gift Of Art

Give the Gift of Art this Holiday Season - Visit RafaelSalazar.com Online Stores for all kinds of Great Discounts.
Visit the different shops where you can find the Special Savings i.e

20% OFF + Free Shipping on Everything

25% OFF iPhone and Samsung cases. 20% off everything else. Use GOGIFTGO

Super Weekend Up to 65% OFF - 20% OFF Sitewide CODE BLACKFRISAVE

Born in Cali, Colombia. South America in 1944.Barranquilla was where he first got introduced to the world of arts; assisting different schools including Bellas Artes with some of the most renowned Colombian artists during the La Cueva years.
Rafael Salazar ~
Artist and Sculptor
from Colombia, South America
He owned an Art Gallery in Sunny Isles Boulevard, where he taught young artists recently graduated from Gainesville University:

“The Art of finding the Inner Artist within you”.

An introspection of the artist’s own mental and emotional processes when defining which type of Art most sincerely reflects his or her artistic personality.

~ Rafael defies the assumption of his medium employing techniques to push his images toward abstraction.~

Nowadays, he is dedicated to painting producing a vast array of creations where his imagination has no boundaries.

This move has improved the 'Handle on my Artwork Inventory',

I highly recommend it to Everyone. "Consolidate and Concentrate" all your Energy in Producing Top of the Line Artworks to suit all Lifestyles - Art Lovers - Art Collectors - Interior Decorators - Interior Designers and the public in general.

Hope you Enjoy the Visit and come by often, as I am always producing new Series of things that catch my attention or are Fun to Look at!

Appreciate your valued Following on Social Media. "Together We Grow Stronger"