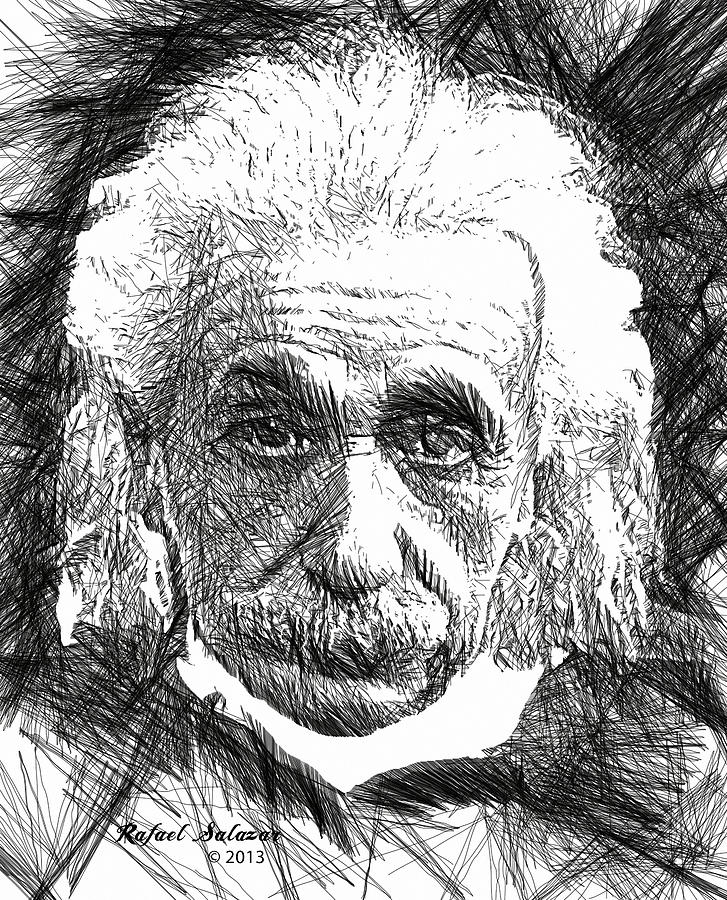 The world will not be destroyed by those who do evil, but by those who watch them without doing anything. - Albert Einstein

Portrait Sketch by Rafael Salazar
Artist from Colombia
Copyright 2013 - All rights reserved
Copyright restrictions:
All images are provided for demonstration purposes only and cannot be reproduced without ​permission

Albert Einstein was born in Ulm, Germany on March 14, 1879. As a child, Einstein revealed an extraordinary curiosity for understanding the mysteries of science (started only at age 10/11). A typical child (only to his socio-economic class and educated middle class), Einstein took music lessons, playing both the violin and piano & a passion that followed him into adulthood. Moving first to Italy and then to Switzerland, the young prodigy graduated from high-school in 1896.
In 1905, while working as a patent clerk in Bern, Switzerland, Einstein had what came to be known as his "Annus Mirabilis" or "miracle year". It was during this time that the young physicist obtained his Doctorate degree and published four of his most influential research papers, including the Special Theory of Relativity. In that, the now world famous equation "e = mc2" unlocked mysteries of the Universe theretofore unknown.

Ten years later, in 1915, Einstein completed his General Theory of Relativity and in 1921 he was awarded the Nobel Prize in Physics (iconic status cemented in 1919 when Arthur Eddington�s expedition confirmed Albert Einstein�s prediction). It also launched him to international superstardom and his name became a household word synonymous with genius all over the world.
Einstein emigrated to the United States in the autumn of 1933 and took up residence in Princeton, New Jersey and a professorship at the prestigious Institute for Advanced Study.
Today, the practical applications of Einstein�s theories include the development of the television, remote control devices, automatic door openers, lasers, and DVD-players. Recognized as TIME magazine�s �Person of the Century�� in 1999, Einstein�s intellect, coupled his strong passion for social justice and dedication to pacifism, left the world with infinite knowledge and pioneering moral leadership.

Superb. I love the effects you have in this sketch. L/F

Thank you so much for your support Tina!

Great Portrait Of One Of The Worlds Great Scientist. FV

Beverly Thank You for your awesome Comment. Happy ThanksGiving!

Published in the Internet publication ARTISTS NEWS.... You Can use Ctl-C to copy the link: http://paper.li/f-1343723559 and Ctl-V ..... to put it into your the Browser Address bar, to view the publication. If you are subscribed, YOU or Friends can ..... Tweet, FB, and email, a copy of the publication, to just anyone you know would be interested.

Cheers to Your Health. Much success Always!

Fantastic sketch of this fantastic scientist with such an unconventional, defiant, non-conformistic way of thinking...great description too - one of his best (unrelated to physics) quote I think! Voted/Fav

As always Marco your fabulous comment humbles me! Happy Holidays to All Yours!